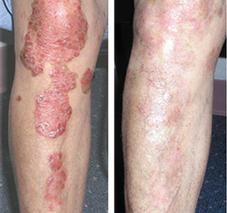 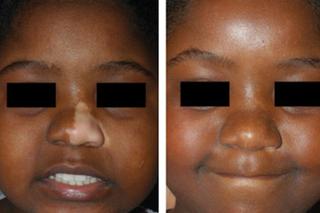 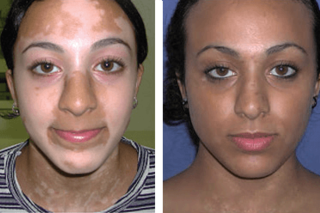 The VTRAC Excimer Lamp System is a state-of-the art unit with a water cooled handpiece for maximum irradiance at 308nm. VTRAC offers the targeted, therapeutic efficacy demonstrated by Excimer lasers, with the simplicity of design and reliability of a lamp system.

Dermatologists have used ultra-violet light therapy for the effective and safe treatment of many skin disorders. Its effectiveness has been cited in clinical studies and research programs with findings published in medical journals around the world.

​Light therapy for psoriasis includes both targeted phototherapy and photochemotherapy with psoralen plus ultraviolet A (PUVA). Targeted phototherapy describes the use of ultraviolet light that can be focused on specific body areas or lesions. PUVA uses a psoralen derivative in conjunction with long wavelength ultraviolet A (UVA) light (sunlight or artificial) for photochemotherapy of skin conditions. In 2001, an XeCl excimer laser (VTRAC™ by PhotoMedex) received 510(k) clearance from the U.S. Food and Drug Administration (FDA) for the treatment of mild to moderate psoriasis. The 510(k) clearance has subsequently been obtained for a number of targeted UVB lamps and lasers, including newer versions of the VTRAC system including the TRAC Ultra™, the VTRAC™ lamp (PhotoMedex), the BClear™ lamp (Lumenis), and the European manufactured Excilite™ and Excilite µ™ XeCl lamps.

The VTRAC excimer laser treatment system is the first FDA market-cleared laser treatment for psoriasis. Light years ahead of other treatment methods, VTRAC is designed to provide effective relief from unsightly and sometimes painful psoriatic skin lesions. Excimer lasers were introduced to the healthcare field in the early 1980’s for refractive surgery to correct vision. In 1997, Dr. Lajos Kemeny at the University of Szeged, Hungary, first published clinical results on the use of the excimer laser for psoriasis. In 1998, Drs. Rox Anderson and Charles Taylor, leading dermatologists at Harvard University, began investigating excimer laser technology for the treatment of skin conditions. There are 3 types of UV light therapy :

Out of these UV ‘A’ is very helpful on Leucoderma. “Psoralen” medicine penetrates in the melanocytes in the skin after 2 hrs. time. By giving UVA on the white spots, due to Photo chemo therapeutic reaction enzymes are created in that part, which in turn form melanin pigment. And this way, gradually white spots disappear. PUVA therapy is effective in case of persons having scattered white spots on their body. In such cases melanocytes do exist in the body, only they are inactive due to some reasons. Activating these cells is possible by PUVA therapy. In case of full white body i.e. Albinism, melanocytes are totally absent in the body and so PUVA therapy does not help in such cases, PUVA therapy is a new form of theraphy where Ultra Violet tubes emitting 311nm are used. Here advantage is that it can be used in children, it can be taken without eating Psoralen tablets etc. Time required to stay in chamber is also very small, say few minutes. Results of Narrow Band are much faster than ordinary PUVA therapy.